“We’d won. We’d cut through the lies and treachery and promised an alliance that would free us both. But even as we won, we lost. We didn’t see what was coming. We didn’t know we had to plan a resurrection.”

Nila Weaver fell in love. She gifted her entire soul to a man she believed was worthy. And in the process, she destroyed herself. Three debts paid, the fourth only days away. The Debt Inheritance has almost claimed another victim.

Jethro Hawk fell in love. He let down his walls to a woman he believed was his cure. For a moment, he was free. But then he paid the ultimate price.

There is no more love. Only war. Hope is dead. Now, there is only death all around them.

The past few days—that had to be a fucking joke, right?

There was no logical answer that would make sense to what I’d seen, heard, and lived the past seventy-two hours.

My best-friend and twin.

This was what she’d been living with? This was how she’d been treated?

This was what she wanted to return to?

Motherfucking why? Why would she ever want to return to this insanity?

We’d been raised in a broken home, chained to an empire that absorbed us right from birth. But we were kept safe, warm, and loved. We grew up together. We shared everything.

But now…I had no fucking clue who my sister was.

But then she came to me.

A woman I never knew existed.

The most stunning creature I’d ever seen.

Only she didn’t come to me on feet or wings of an angel. She rolled into my life and demanded my help.

And for better or for worse.

Daniel cackled like a mad hyena, his fingers stabbing into my bicep. Without breaking his stride, he stole me further away from the parlour and into the bowels of the house.

“Take me back!” I squirmed, doing my best to return to Jethro.

He can’t be dead!

Just because he lay unmoving and bloody didn’t mean he’d left me behind.

That’s exactly what it means.

I shook my head, dislodging those awful thoughts. He’s alive. He had to be.

I couldn’t tolerate any other answer. I refused to live in a world where evil triumphed over good. That wasn’t right—life couldn’t be that cruel.

It’s always been that way.

My mind filled with images of my mother. My father’s desolation. My broken childhood. Evil had puppeteered us from day one. Why should now be any different?

I swallowed a sob. 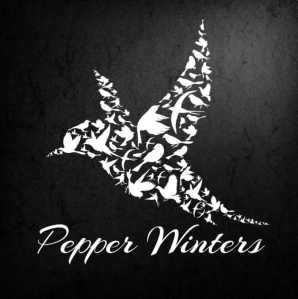 Pepper Winters wears many roles. Some of them include writer, reader, sometimes wife. She loves dark, taboo stories that twist with your head. The more tortured the hero, the better, and she constantly thinks up ways to break and fix her characters. Oh, and sex… her books have sex.

Title: Twisted Together (Monsters in the Dark, #3)

“After battling through hell, I brought my esclave back from the brink of ruin. I sacrificed everything—my heart, my mind, my very desires to bring her back to life. And for a while, I thought it broke me, that I’d never be the same. But slowly the beast is growing bolder, and it’s finally time to show Tess how beautiful the dark can be.” Q gave everything to bring Tess back. In return, he expects nothing less. Tess may have leashed and tamed him, but he’s still a monster inside.
After surviving the darkness, a new dawn has begun. Twisted Together wades through black to grey, chasing the light of true love to banish the shadows forever. Pain is a requirement, connection a necessity. But ultimately Q and Tess must face their demons, before they can embrace their future.

Tears of Tess (Monsters in the Dark, #1)

Quintessentially Q (Monsters in the Dark, #2)

Twisted Together (Monsters in the Dark, #3)

Pepper Winters wears many roles. Some of them include writer, reader, sometimes wife. She loves dark, taboo stories that twist with your head. The more tortured the hero, the better, and she constantly thinks up ways to break and fix her characters. Oh, and sex… her books have sex. She loves to travel and has an amazing, fabulous hubby who puts up with her love affair with her book boyfriends.