Ellen
My life is far from perfect, but I’m ok with that.  I’ve worked hard to get to where I am.  I have a cute little house, a job that fulfills me, and a little boy that I love more than life itself.  I pride myself on being a strong, independent woman, and letting a man fix my problems for me just isn’t the way I work.
I had Jase pegged from the second I laid eyes on him.  The man’s a player and I have no intentions of being played.  Been there, done that.  I don’t care that he has a killer smile and an ass I could happily spend all day bouncing quarters off of.  His interest is kind of flattering in the beginning – and then it’s not.
Jase
People say I don’t take anything in life seriously.  They’re probably right.  I’ve seen the shit life can throw at you and I refuse to let it touch me.  I live free – I have fun.  People say I don’t respect women.  Well, they’re wrong about that.  I love women almost as much as they love me.  I love the way they smell, the way they taste, and I especially love they way they feel when I get them under me.
I’d met Ellen months ago, and no matter what I do, I can’t seem to get her out of my head.  She’s gorgeous, funny and has an incredible ass.  The only problem is that I’ve never had to work so hard to get a woman into my bed … but we’ll get there.  I’ll make sure of it.  She doesn’t know it yet, but my brand of playing is just what she needs. 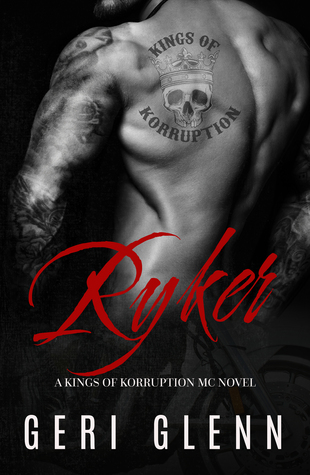 Charlotte
Ever since I was a little girl, I’ve taken care of everyone around me, including my self-centered older sister, Anna. When her poor choices make us targets of the Devil’s Rejects Motorcycle Club, I grab her and we run like hell. A new city, a new job, a new life. It’s almost perfect – and then I meet Ryker.
He’s gorgeous, rugged and too cocky for his own damned good. But he’s a biker – exactly the type of man I’ve been running from. I have no business getting involved with a man like him. Too bad I can’t get him out of my head.
Ryker
As V.P. of the Kings of Korruption MC, I know all about violence and loss. In my world, getting involved with a woman never turns out well. Avoiding commitment isn’t something I have to work at – it’s just a way of life. Then I meet Charlotte. Drawn to her kindness and beauty, I know there’s no place for her in my world. I have to let her go.
Finding Charlotte battered and bloody late one night, I go against my own beliefs, making it my mission to protect her. The Devils are out for blood and it’s Charlotte’s they want. Maybe I can’t keep her but I will put my life on the line to keep her safe. If not, I face losing the only woman that’s ever made me feel alive.

Laynie
Smile when you’re happy, cry when you’re sad and don’t ever be afraid to try something new. These are the words I live by. We only get one shot at this life, and I intend to live the best one I can. I had it all growing up. Popularity, beauty, great friends and a perfect family. But then one day, it all changed – now I’m blind. I’ve never let that stop me though. Life is an adventure and I believe in making the best out of every moment.
I spend my days with a job I love, online friends and a sexy new book boyfriend every week. I know in my heart that someday, my own prince charming will come along and appreciate me for exactly who I am – I won’t settle for anything less. Meeting Tease seems like the beginning of my fairy tale … until he opens his mouth.
Tease
I don’t trust people – ever. Every single person I’ve ever loved has contributed, in one way or another, to the shit show that is my life. Keeping everyone I meet at arm’s length, I work hard at being the star of most people’s nightmares. People think I’m a monster and honestly – they’re right.
Laynie’s beauty is what caught my eye, but her personality is what held it. Laynie’s the only person to ever see past my appearance and break down the walls I’ve worked so hard to build. I’ll do whatever it takes to keep her. When things heat up with a rival club, and Laynie gets caught in the crossfire, I will unleash hell on earth to protect the woman who makes me want to trust someone again. When bullets start flying and bodies start piling up, keeping her safe may be the last thing I ever do.

Geri Glenn is the debut author of the Kings of Korruption MC Series. The first book, titled Ryker, is releasing on August 14, 2015, and can be read as a standalone.
Geri has been an avid reader for as long as she can remember. She can usually be found curled up in a comfy chair, reading on her iPad both day and night. Geri is an incurable night owl, and it’s not uncommon for her to still be awake, reading at 4 am, just because she can’t put the book down!
Geri loves all genres of fiction, but her passion is anything romantic or terrifying; basically anything that can get her heart pumping. This passion has bled out onto her laptop, and became the Kings of Korruption.
Writing this first book in the series knocked off the #1 thing on Geri’s bucket list, and publishing it has been an absolute dream come true. She hopes you love the Kings as much as she does.

Ryker buries himself in music and insignificant women, all part of his plan to keep the woman who owns his heart free from his tainted past and his darkest secret. But pretending not to want her has never been easy.
Loyalty, honesty, and desire for Ryker; three things that Faith Bishop excels at.
Excited about her future, Faith looks forward to finally living life on her terms. Intelligent and realistic, she knows the women who steal Ryker’s attention are all of the things she will never be. But wanting him has never been a choice.
Will he be able to resist her, or will he finally cave to his desires? Will she be able to handle his past, or will it shatter her?

The ache in my chest grew.  Placing my hands on her face, I whispered, “I’m sorry.”

I brought my lips towards hers and looked in her eyes. She was right about everything. I saw the innocence in her eyes, and I couldn’t do it. I couldn’t ruin her. Her warm breath caressed my mouth, and I inhaled her air so I could always have some of her with me.

Family and friends are the most important things to Joanne. She enjoys meeting new people, traveling, reading, relaxing on a beach and shopping. She has an addiction to Coffee and Diet Coke; you may want to stand clear if she hasn’t had her daily intake!
Writing has been something that has been private and not shared until the day she decided to publish Unexpected Chance. Waking up one morning to the voices of Alex Logan and Aubrey Ryan changed everything!!
She is an avid sports fan especially when it comes to the New York Yankees. She also enjoys playing and watching golf.
She firmly believes when that unexpected chance comes, take it. Don’t let it pass you by. You never know what you could be missing.