Today we have the gorgeous cover reveal for Grappling for Position by Melynda Price! Check it out and grab your copy March 2nd! 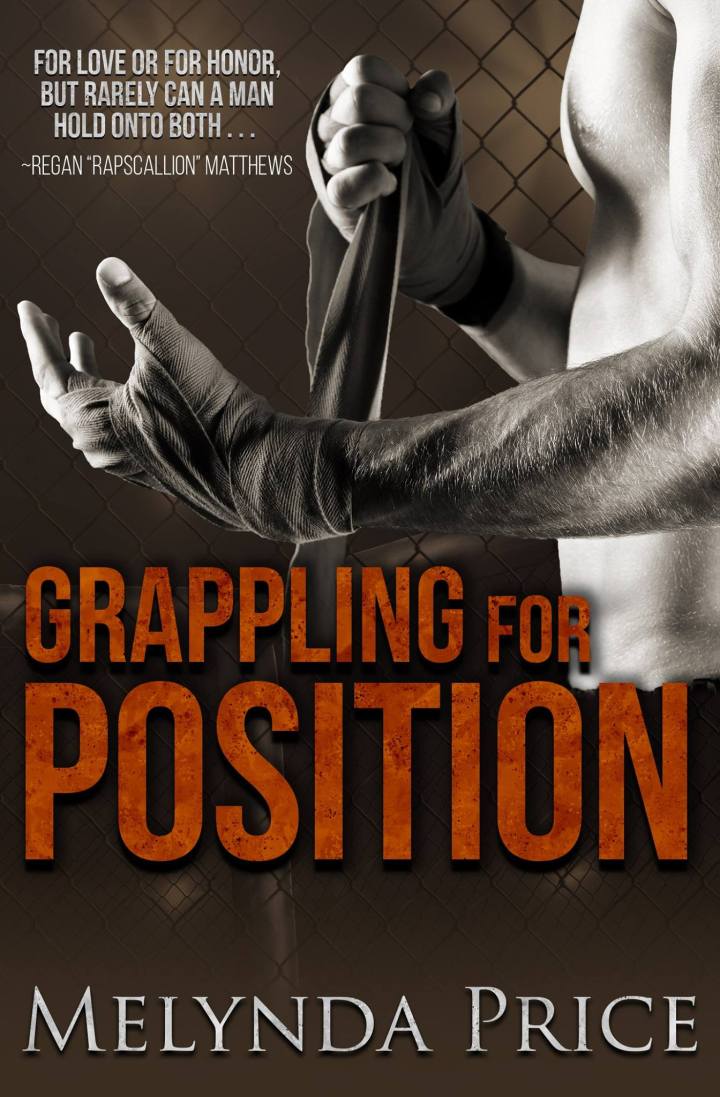 About Grappling for Position:

Willow Scott is sweet, innocent, and 100% untouchable. She’s the epitome of everything MMA fighter Regan “Rapscallion” Matthews has always wanted, but will never have. A woman like her deserves more than a scrapper from the wrong side of the tracks–the Scott’s charity case.

Unfortunately for Regan, his best friend’s little sister is all grown up and she’s tired of playing by the rules. When Willow sees something she wants, she goes after it–damn the consequences–and her sights are set on him. With a shot at the Welterweight title finally within his grasp, Willow Scott is a distraction Regan can’t afford. But this willful woman is determined to make him tap-out.

Willow has been in love with Regan Matthews since she was in pigtails and braces. Over the years, she’s all but given up hope of her brother’s friend returning her affection, but a part of her never stopped praying that someday he would see her as more than Kyle Scott’s annoying little sister. If Willow has her way that’s all about to change, and Regan must decide if he’s willing to risk losing his best friend and the Welterweight title for a woman he doesn’t deserve but cannot live without.

**All Against the Cage books can be read as stand-alones**

“Come here.” His brow arched mischievously as he held out his hand.

Hesitantly, she placed hers inside his, and Regan’s strong fingers immediately enveloped her hand. A jolt of heat raced up her arm, which jump-started her heart, kicking it into a wild rhythm as he led her toward her bedroom.

Wait. What was he doing? Excitement warred with anxiety. She wanted Regan, no question about it, but this . . . This was moving kind of fast, wasn’t it? She knew he moved fast. But this was like speed dating on crack. She hadn’t even been home for five minutes, and he was already half-undressed and pulling her into her bedroom.

“Talk?” He sounded as if the idea was absurd. “About what?” Then his steps faltered, his brows narrowing. “Wait a minute. Why do you think I’m bringing you in here?”

She didn’t need to respond. The flush staining her cheeks was all the answer he needed. One plus one equaled two pretty damn fast, and he cursed, scrubbing his hand over the top of his head, making it rain white powder. What the hell was that?

“You think I’m bringing you into your bedroom so we can hook up?”

Well, he didn’t have to look so disgusted by it. Talk about your confidence booster . . .

Regan dropped her hand like it was on fire, but that would be her face. Embarrassment burned up her cheeks.

“Holy hell, don’t you know me at all? And you were still going to come with me?” he accused.

“You’re half naked,” she said in her defense. “And you said you were waiting for me. And you were pulling me into my bedroom. What was I supposed to think?”

“And I told you this afternoon that I wasn’t going to do anything about it.”

All right . . . those were fighting words. Now she was pissed. Indignation rose inside her, drowning out her embarrassment, and sparking her temper just enough to make her reckless. “And I told you I was.” Willow reached up and began unbuttoning her shirt, starting at the top and working her way down. Regan’s eyes grew wide with shock and then dropped to her breasts, the absinthe brightness darkening to emerald. Her nipples hardened under the intensity of his stare.

“What are you doing, Willow?”

Was that anxiety she heard in that tough fighter’s voice? “What does it look like?”

“It looks like you’re taking your fucking clothes off in the hall. Stop it.”

Half the buttons were undone, exposing the shell pink lace cups of her demi bra and her generous swell of cleavage. She had great boobs. They were one of her best assets, and in just a minute, Regan was going to find that out too. Not going to do anything about it, huh . . .? Well, they’d see about that.

“Willow . . .” Tension filled his voice, now husky and raw, but his eyes didn’t leave her chest—not even to blink. He looked a mix between mesmerized and panicked. Was this the mighty Regan Matthews? “Cunt Conqueror,” his friends teasingly called him. The only thing he looked capable of conquering right now was a panic attack.

This shift in power between them made her bold, and frustration made her careless—a dangerous combination when it came to Willow Scott. She released her last button and let her top fall to the floor.

She took a step toward him, and he countered with one back, slamming into the wall. Tucking her lips between her teeth to hold back her mischievous grin, she taunted, “What are you going to do about it?”

She couldn’t believe she was doing this—taking her clothes off in front of Regan. This wasn’t her. She’d barely ever kissed a guy, let alone undressed in front of one. But she’d set them on an emotional game of chicken, and she’d be damned if she backed down now and risked losing all the ground she’d gained with him this afternoon.

Giving him a daring smile that held a lot more confidence than she felt, she reached behind her back and slipped her fingers beneath her bra clasp. Regan flinched. He knew what she was about to do. Hard core lust flared in his eyes, stealing some of her bravado. There was a real possibility she’d just stepped into the deep end of the pool—without a floaty.

She’d heard the rumors whispered by the cage-bangers loitering around the gym and at the CFA-sponsored events. Regan and Aiden were fan-club favorites. So was her brother, but that was just—eww . . . Some things a girl just didn’t need to know about her brother, and how he liked it, and with whom he liked it, were two of them.

Unfortunately, in this business, she learned more than she ever cared to know about the sexual appetites of Marcus’s fighters. Cole never hit the same hole twice, Aiden preferred them two at a time, and Del Toro never touched ’em, which spawned speculation that he might be into dudes, but she didn’t think so. He was just broken—in every way. Kyle . . . not gonna go there. And Regan, well, Regan was known for his ravenous appetite. And that wild, untethered hunger in his eyes right now told her she was looking like a gazelle to this lion.

Breathless seconds kicked by, eyes locked, and muscles tensed. Was this what it was like to face him in the cage? –focused and ready to strike. Her heart slammed against her ribs as she stood there, frozen. With the slightest flick of her fingers, her bra would come loose, dropping to the floor. If she could just summon the courage to do it.

She didn’t have a chance. Regan lunged for her. Mercy, he moved fast. She let out a startled squeak, expecting his mouth to come crashing down on hers as he lived up to his reputation. He was going to possess her—consume her.

But instead, he grabbed her arm, pulling it away from her bra clasp. “Stop taunting me, Willow. You’re not going to break me,” he growled, spinning them to pin her between the wall in the hallway and his wall of hot, muscled flesh. His lips were achingly close to hers. She wasn’t sure who he was trying to convince, her or himself. The tension firing between them was electric, his need palpable as he fought his beast into submission. She could see the war waging in his eyes, and it thrilled her—watching his will battling his emotions and wondering which one would win, because there was no doubt in her mind Regan wanted her.

She knew she wasn’t playing fair, but Willow was past fair; she was playing for keeps. “Maybe not, but it’s only right if I do since you’ve broken me.”

He looked at her in question, eyes narrowing over brows drawn tight in that infamous “Rapscallion” scowl.

“You ruined me for every other guy, because the only one I’ve ever wanted is you. I’m almost twenty-one years old, and I don’t even know what it’s like to really be kissed. How pathetic is that?”

Catch up on the Series:

Melynda Price is a USA Today Award-Winning Finalist in Contemporary Romance. Her bestselling mixed-martial-arts romance, Against the Cage series, has multiple times hit #1 in the Amazon Bestsellers list. She is releasing a new romantic suspense series, Beneath the Surface, this fall.

A multi-published author of contemporary and paranormal romance, what Price enjoys most about writing is the chance to make her readers fall in love, over and over again. She cites the greatest challenge of writing is making the unbelievable believable, while taking her characters to the limit with stories full of passion and unique twists and turns. Salting stories with undertones of history whenever possible, Price strives to plant her characters deep into her readers’ hearts so they will long be remembered.

She currently lives in Northern Minnesota with her husband and two children, where she has plenty of snow-filled days to write while curled up in front of the fireplace with her Chihuahua and a hot cup of coffee. 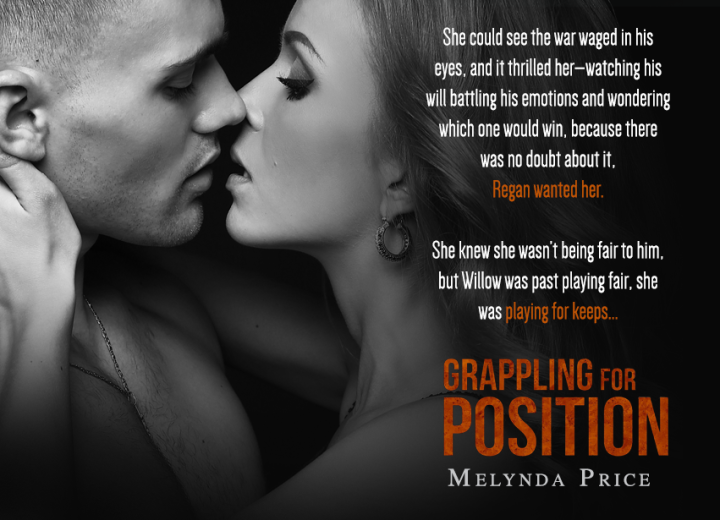