Caerwin, a young Cornovii princess, watches from the rocky battlements of her tribe’s hillfort as Rome’s legions approach. Surely the valiant warriors of her tribe will fend off this swarm of foreign invaders. Disbelief slowly changes to horror as Romans overrun her home.
Captured and held in Roman camp, Caerwin faces Legate Marcellus Antistius who makes it clear she will submit to his demands. In spite of her resistance, he forces her pleasure. She begs to die.
Caught between his increasing infatuation with this Briton princess and the demands of his military command, Marcellus must come to terms with his past.
A fiery novel of domination and submission, this historical romance follows Caerwin as she refuses to accept her new reality. Life as she knew it is over. Forever. In its place stands a man she can never love.
Set in the year 47 AD as four legions of the Roman army invade Britannia and blaze a path of death and destruction, this novel portrays the plight of native Celts who must yield their lands and possessions to become vassals of Rome—or fight to the death. 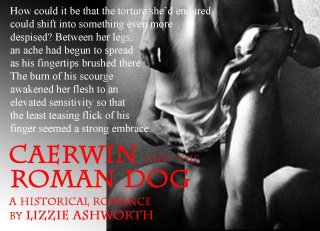 The man she had seen on the white horse paused in the opening. His stare fastened on her and sent chills down her spine. He stood taller than the other men, his body of a stature more like her own people than these rat men of Rome. His layered metal vest had been removed as had his helmet and other outer garments, so that he wore only loose breeches that ended at his knees. She swallowed, casting her eyes away after her first long frozen moment.
“Do you like what you see?” he asked quietly.
The words shocked her, spoken fluently her familiar language. She turned to face him. Words rose to her lips but remained unspoken. He examined her, openly casting his gaze up and down her body as if he owned her. The terrible realization struck her—he did own her. She had been caught up at his command and now stood captive to his whim.
She spat in his direction and turned her face away. Tugging against the tight leather bonds, she succeeded only in chafing her wrists. Her nerves heightened to brittle pitch as she sensed him approaching. She knew what he would do, what such men did to captured women.
He placed himself in front of her, so close she could not look away without seeing his chest. His scent stung her nose, sharp and edged with the copper hint of blood. Stains marked his arms and face, sweat-encrusted dirt and smears of blood. His voice startled her, so close and so quiet.
“What is this trinket?” he asked, fingering the torque.
She glared at him. “Shall you steal it from me like you have stolen our lives and our land?”
“I wish only to converse with you, to ease this friendship we’ve started.”
She snorted and strained at the bonds holding her. “I wish only to kill you. I would leave your body for the crows.”
He grabbed her face and held her still while his mouth tasted her. His lips moved against her lips. His tongue sought the seam and when she refused to spread her jaw, he bit her lower lip. Her shocked cry gave him entry, and his tongue invaded her mouth, probing and pushing.
Hate rose in her chest, blinding her. She clamped her teeth down on his tongue, savoring a brief taste of blood as he jerked back.
“Vipera!” He wiped his hand over his mouth. “You won’t win this battle, but if you wish a contest…” His big hand closed over the neck of her garment and ripped it down the front of her body. The beautiful woolen dress she had so carefully woven hung off her shoulders.
“I will have you,” he said in a hoarse voice. “Whether you wish it or not. Let the others portion out the gold and silver, whatever meager wealth your tribe held. I have wealth enough in coin. You with your hair like copper,” he added, fingering her long braid, “your eyes blue as sky—you are my pillage for this day.”

Lizzie Ashworth has been through career, marriage, kids, and even ran her own cafe, but writing has always been her secret love. Hidden away on a remote woodland hilltop in the Arkansas Ozarks, she accepts advice from her hound dog Weezie and her black cat Esmeralda. She has authored seven novels and several short stories which explore the intimate nuances of human relationships.
Liz writes erotic romance because her mind just naturally runs to the gutter. Also, it’s way past time to celebrate women’s sexual freedom and the evolution of our culture to finally bring sex out of the closet. What she find most exciting about this minute in the history of literature is that through indie publishing, the author can directly connect with her readers.
She enjoys cooking, gardening, and vacations at the Pacific coast. Sunrise and sunset provide her favorite moments, the magical twilight between two worlds when anything seems possible. Most of all, she loves snuggling up with a good book.
Website and blog:  http://lizzieashworth.com/
Facebook author page: https://www.facebook.com/AuthorLizzieAshworth?ref=hl
Pinterest page (includes boards for all her books)  Check out my “Romans” board for more on Caerwin and the Roman Dog. https://www.pinterest.com/ashworthlizzie/romans/
Goodreads Page: https://www.goodreads.com/book/show/27235437-caerwin-and-the-roman-dog