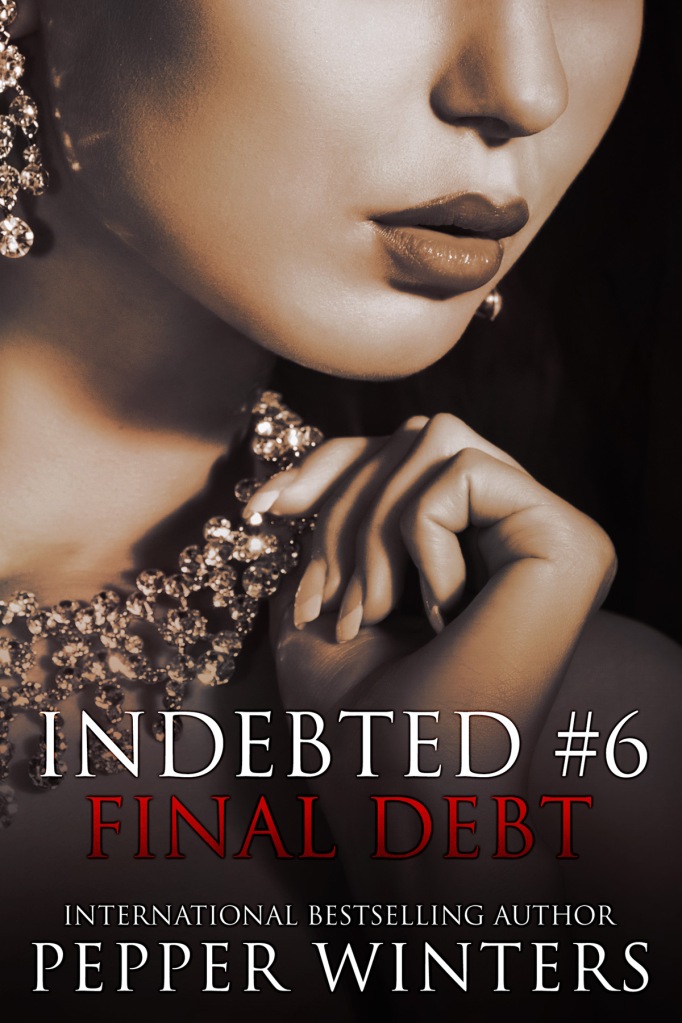 For Release Date Alerts sign up for the Pepper Winters Newsletter

The Last Book in the New York TImes Bestselling Dark Romance Series. Where love tries to triumph and darkness continues to reign….

“I’m in love with her, but it might not be enough to stop her from becoming the latest victim of the Debt Inheritance. I know who I am now. I know what I must do. We will be together—I just hope it’s on Earth rather than in heaven.”

It all comes down to this.

I pushed back, gripping the handrails of the private jet, throwing my weight against Daniel’s incessant pushing. “Stop!”

“Get up the fucking stairs, Weaver.” Daniel jabbed his elbow into my spine.

I stumbled, bashing my knee against the high tread. “You can’t do this!”

Daniel cackled. “I think you’ll find we can.” He shoved me higher.

My heart hurt—as if every mile between us and Hawksridge was a blade slicing me further from Jethro’s protection.

Time once again stole my life.

One moment, I’d been love-bruised and adored, tiptoeing back into the Hall; the next I was trapped, forced to dress in jeans and a hoody, and obey Daniel as he lurked in my doorway, barking orders to pack a few meagre belongings.

My pussy ached from having Jethro inside me. The dampness of his release still decorated my inner thighs. My mind raced, doing my best to see a loophole, figure out a way to stay.

I hadn’t had time to shoot him with the gun Jasmine gave me. I couldn’t scream and shout and hope to God Jasmine heard me so at least she could warn Jethro.

I couldn’t even text Kite with Daniel lurking over my every move.

The only hope I’d had was packing the altered clothing where I’d sewn knitting needles and scalpels into the hem and cuffs, hiding weapons in case I was taken by surprise.

I wanted to cry for my forward thinking.

The few hopeless weapons would be my only ally.

I would’ve been free in two days.

(all other platforms, Amazon, Kobo, Barnes & Noble, Kobo will be closer to release date)

Debt Inheritance is also available in Italian coming September 2015! You can pre-order now on iBooks ..

If you haven’t started this series, the first book, Debt Inheritance is FREE on all platforms!

(all other platforms, Amazon, Kobo, Barnes & Noble, Kobo will be closer to release date)

Pepper Winters is a NYT and USA Today International Bestseller. She wears many roles. Some of them include writer, reader, sometimes wife. She loves dark, taboo stories that twist with your head. The more tortured the hero, the better, and she constantly thinks up ways to break and fix her characters. Oh, and sex… her books have sex.