Boy meets girl, boy wins girl, boy nails girl—boy’s gone by morning.
I think for sure it must’ve been a dream because there’s no way a guy could look like that, touch me like that and be so in tune with me on every known level, and disappear, leaving me with nothing but a good story to tell my friends.
When he walks into my bar three months later, everything I thought I knew and what we’d had disappears in the blink of an eye and the blinding light of the three-carat diamond on his fiancée’s hand.
It seems what I thought was a dream is now my most complicated reality, and I’ve got absolutely no idea how to fix it – or if I even want to.

I rush out from behind the bar and through the swinging door. I’m almost at the end of the corridor when the door opens behind me and I freeze. My chest tightens, because if it’s either of the two men I think it could be, there’s no way this will end well.
He comes closer, each step like an echo matching the impending doom I feel in my gut.
“I got your message.”
“Good,” I reply, fighting every urge I have to turn toward him.
“And you were right. You do deserve better.”
“I do.”
“I hate the thought of him touching you.”
I gasp, my mouth dropping open at his admission.
“I’ve known him for thirteen years. He’s supposed to be my best man. I love him like a brother but I hate him touching you.”
Oh no he didn’t. I spin around and come face to face with Millen, his face tight, his arms crossed over his chest. “What?” I spit out.
“It’s not right. I love him like a brother and I want him happy. Just not happy with you. Especially not happy touching you.”
“How dare you?” I grind out, my jaw so rigid my face hurts.
“I hate seeing you with anyone that’s not me.”
My eyes bug out, completely dumbfounded. He’s crazy if he thinks he has any say in who I see.
“You’re a joke,” I spit out, the blood simmering in my veins now boiling over. Lifting my hand up, I poke my finger hard into his chest. “You’re the one with the problem. It’s was you who came up to me. You that lied and said you were single.” My voice threatens to break but I power through it. “You made me become the one thing I never wanted to be—the other woman. And to her. You’re such a fucking ass—”
The rest of the word gets stuck in my throat when he wraps his hand around my neck and crashes his mouth into mine. His body crushes me into the wall as he kisses the shit out of me. And—dammit—it’s a good kiss—a scorching-hot, never-to-be-the-same-again kiss.
I tear my lips free and shove him back. I step forward, and my hand darts up. With a resounding crack, I slap him across the face. I try again but before I can make contact he catches me, swings my arm behind my back, pins me in place and kisses me again. I fight him off for a second before giving in. My anger melts away as he tastes me, his tongue plundering my mouth. I grip his hair with my free hand, pulling the strands tight, his guttural groan vibrating through me, setting my entire body on fire.
His hips grind against mine and all of the memories from three months ago come flooding back. The way he took control, the way he played my body as if he’d known me years not hours, and how I thought that night might have been the start of something different, something life-changing.
I match his kiss stroke for stroke, the air sparking with the sheer heat between us. I know in the back of my mind that this will be the last time I kiss him, and I want to take my fill.
A throat clearing breaks our lust-fueled haze, snapping us back into reality.
Millen steps back like a caught schoolboy, both of us turning to find Drew at the entry to the hall, his eyes blazing. We stand there in silence, our labored breathing audible over the quiet hum of the music in the bar.
“Drew,” I whisper.
He cuts his narrowed glare from his best friend to me. “Dinah asked me to come get you.” His voice cuts through me, his tone cold as ice.
“Drew, I—”
“A big group just came in and the girls are getting slammed,” he says, his jaw set tight.
I move toward him. “It’s not—”
He shakes his head, opening his mouth to say something, but he slices his gaze through Millen and stops on me. “I’m going, but you,” he says, pinning Millen with a cold stare, “you should get back to your fiancée. You know, the woman you should be kissing.” With that, he turns and slaps his palm against the door, swinging it open and stalking out without another word. 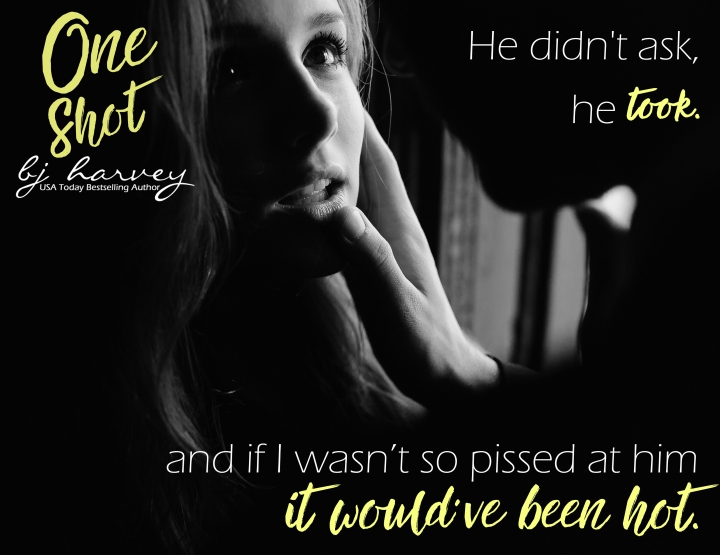 man and woman in a relationship somewhere in the room

BJ Harvey is the USA Today Bestselling Author of the Bliss Series. She regards herself as a smut peddler, suspense conjurer, and a funny romance thinker upper. An avid music fan, you will always find her singing some hit song badly and loving every minute of it. She’s a wife, a mom to two beautiful girls, and hails from what she considers as the best country in the world—New Zealand.