AN ANTHOLOGY OF HOT MC ROMANCE

Add to your TBR:

Blurb
Bikers, the ultimate alpha males. But what of women who ride?
These sexy independent road warriors shirk the conventions of lady-like
behavior and live life by their own terms – wild and free.
BIKER CHICKS is full of sexy stories about women who ride,
whether they be lone wolves or part of a gang. Some of the best authors in MC
romance along with some new names and faces to the genre tell us how these
strong women find the sexual satisfaction and romance we all long for, for one
of the best causes.
All proceeds of this anthology go to Bikers Against Child
Abuse*, so come take a ride with us.
Authors in this Anthology include…
Susan Child
MariaLisa deMora
A.J. Downey
Emma Lee
Vera Quinn
K. Renee
Bibi Rizer
G.M. Scherbert
Erin Trejo
Text copyright © 2017 multiple authors
This is a work of fiction. Names, characters, businesses,
places, events and incidents are either the products of the author’s
imagination or used in a fictitious manner. Any resemblance to actual persons,
living or dead, or actual events is purely coincidental.
All rights reserved.
*Bikers Against Child Abuse International (B.A.C.A.) is not
directly affiliated with this charity-driven anthology and use of their name to
indicate funds distribution does not constitute endorsement, recommendation, or
guarantee on their behalf for the efforts of these individual authors. No
liability of any kind, implied or expressed, is given with respect to B.A.C.A.
or their activities. 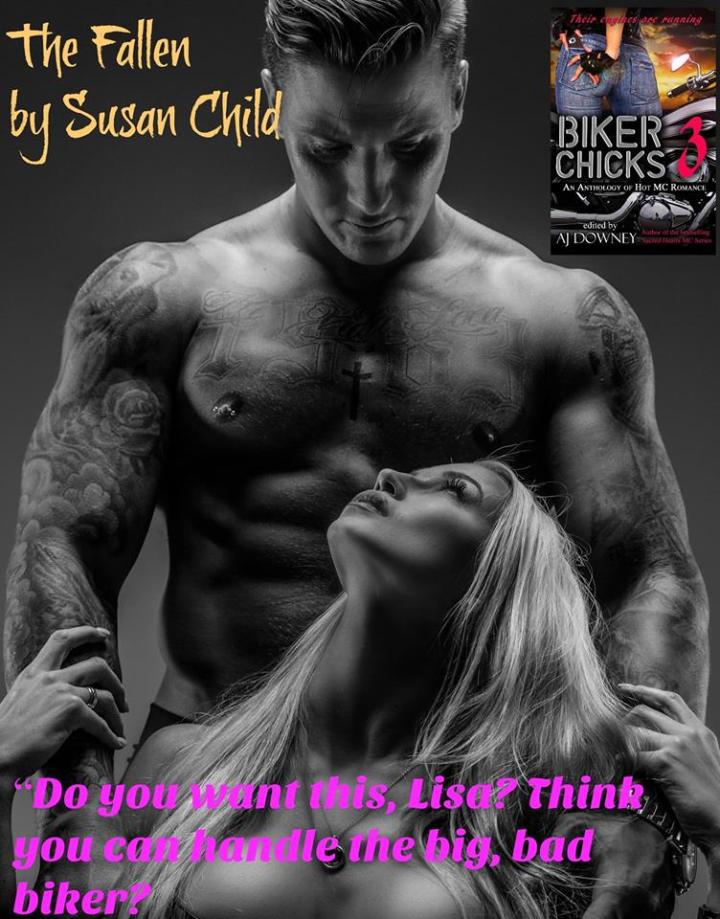 The Fallen by Susan Child

Lisa’s scooter breaks down, can she handle Connor’s Harley?
About Susan Child
When Susan was in high school, she never really liked to read,
but when she was a child she did. Go figure. It wasn’t until after she
graduated that she caught the reading bug. Susan had to go to a book store to
sell off her text books and a particular book caught her eye. This book stood
out from the other second-hand books because it had a pink cover. It was only a
couple of dollars, so she thought, “Why not?” But she couldn’t quite bring
herself to read her bargain book. It had a pink cover!
Then, after it tormented her for three weeks, she finally
picked it up and… could not put it down. Susan finished it in two days! After
Google-ing the author, she found that she’d written a heap of books for
Harlequin Mills & Boon as well as Single Titles.
So of course Susan had to buy all her other books! And when
she realised that there were other Mills & Boon authors out there, she just
had to search out their books, too. And she loved them!
Susan got a ton of inspiration from those books. But the most
important thing she realized was that she wanted to write those books, too. She
wanted to be a Paranormal author! Because let’s face it, who doesn’t like
things that go bump in the night?
Amazon  Honey Haven  Facebook  Newsletter  Street Team  Twitter   Website

Fran wanted a love like her grandparents, she didn’t find it
with Pete, has she found it with Kris?
About MariaLisa DeMora
Raised in the south, MariaLisa learned about the magic of
books at an early age. Every summer, with the help of a gracious librarian who
did not believe in age-restricted stacks, she would spend hours in the local
library, devouring books of every genre. Self-described as a book-a-holic, she
says “I always loved to read, then I discovered writing, and I adored that,
too. For reading … if nothing else is available, I’ve been known to read the
back of the cereal box.”
She still reads voraciously, and always has a few books going
in paperback, hardback, or on devices.
Facebook
Twitter
Goodreads
Pinterest
Instagram  Amazon  B&N  iBooks  Website

Adelaide is finally free and alone with Tabbris, her very own
guardian angel.
About A.J. Downey
A.J. Downey is a born and raised Seattle, WA native, and the
author of the bestselling Sacred Hearts Motorcycle Club series. She finds
inspiration from her surroundings, through the people she meets and likely as a
byproduct of way too much caffeine. She has lived many places and done many
things, though mostly through her own imagination. An avid reader all of her
life, it’s now her turn to try and give back, entertaining as she has been
entertained.
You can find her:
Amazon
Blog  Goodreads
Facebook
Pinterest
Website  YouTube
If you want the easy button digest, as well as a bunch of
exclusive content you can’t get anywhere else, sign up for her mailing list
right here http://eepurl.com/blLsyb 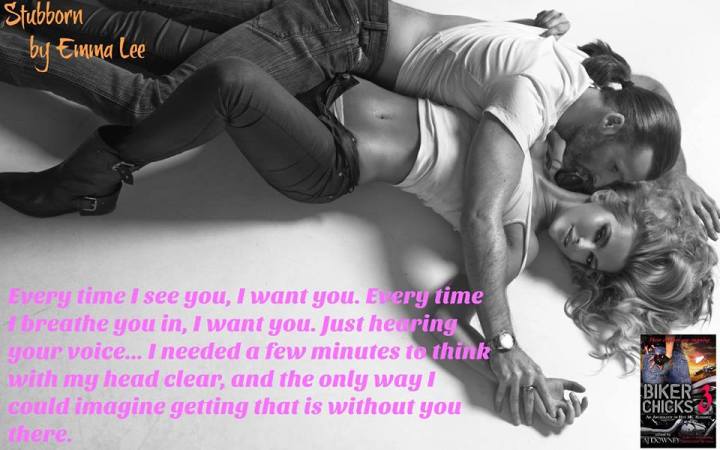 Angelfish is headstrong but Prescott can be stubborn too.
About Emma Lee
Emma Lee is a native Californian wanderer currently
experiencing the wonder of rain in the Pacific Northwest. She loves to garden
even though she’s lousy at it, and often finds herself staring blankly while
her son discusses Minecraft. An avid reader and prolific writer all her life,
she’s recently turned to sharing the kinky, crazy stories in her head instead
of hiding them in the closet.
Goodreads 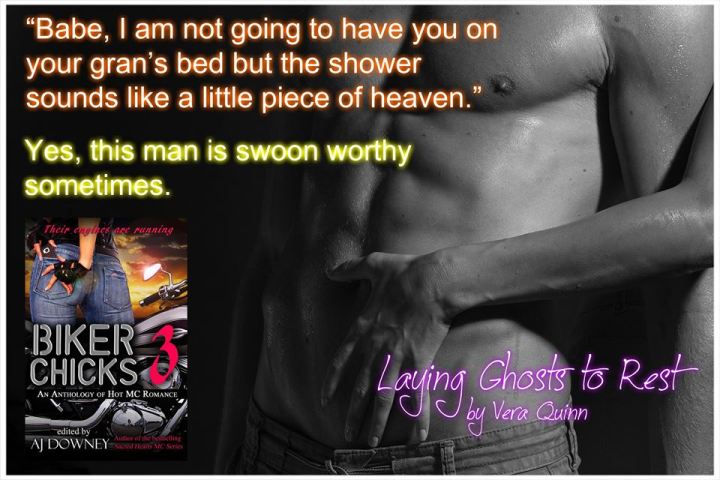 Six years ago, Lottie left her home and family living her life
on her terms, returning for her Grandmother’s funeral will she finally let go
of the past?
About
Vera Quinn
Vera Quinn has always been an avid reader and had an active
imagination. When her sister became sick in 2015 she spent a lot of time in
doctors’ offices and hospital rooms. She filled that time reading. Her kindle
and laptop became her good friends. She started writing storylines and doing
background research. Her sister convinced her to
follow her dream, so she did and the rest is history.
Her sister passed in February 2016, and Vera published her
firstbook, Never Forever, in March 2016. She says she is learning as she goes,
and that is true. She’s been lucky to make good friends in the indie book
community and she works with some of the best. She doesn’t know what is next
but she is excited to meet it head on.
Vera has been married to her husband, Charles, for 22 years
and he is her rock. She has two grown sons.
Facebook  Twitter  Amazon  Web

Past Ride by K. Renee

Willow left Flynn 4 years ago, but now he’s found her.
About K. Renee
K. Renee started writing in 2015, but has loved writing since
she was young. She started writing because she couldn’t get the stories out of
her head, no matter what she did. She’s twenty-seven years old and typically
writes in her free time or on her lunch break. K. Renee works full-time and
tries to go to the gym every day. She reads constantly and has hundreds of
books she can’t wait to start.
Website
Amazon
Tsū  Instagram
Facebook Fan
Page
Twitter  Author Goodreads Page
Blogger Notification list
Sign up  ARC
Sign Up Sheet 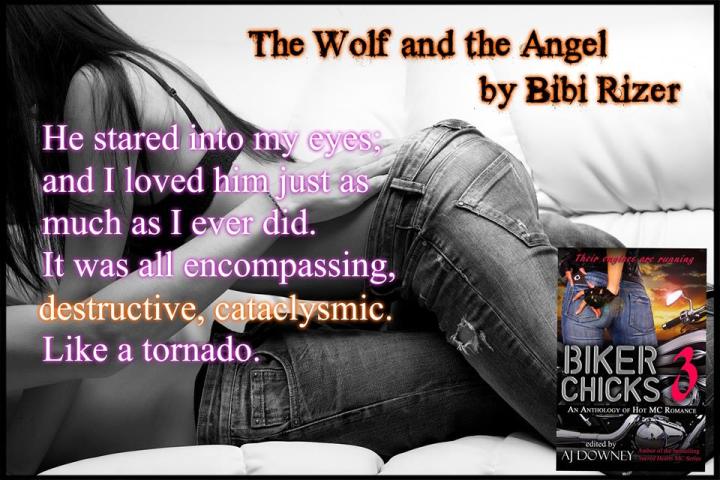 Wolf not Wild by Bibi Rizer

She thought she’d lost Wild forever, but he’s back for his
Angel.

About Bibi Rizer
Bibi Rizer (http://www.bibirizer.com)
is a mom, blogger, teacher and writer living in the Pacific Northwest. While
she’s been writing professionally for many years, romance and erotica are
relatively new pursuits.
Bibi likes writing about strong kinky women and brave willing
men living in realistic and imperfect worlds.
In her spare time Bibi sings Karaoke and hangs around on film
sets with child actors. Having the the firm belief that no one can be too weird
or too funny, she happily admits that most of her favorite people and
characters are both.
Goodreads
Facebook

Twisted Pleasures by GM Scherbert
She wasn’t looking for anything that summer but she found
Lilly and Dominic.
About GM Scherbert
GM Scherbert was born on a brisk late April morning and grew
up in a small town in the Midwest, but quickly decided that was not the life
for her. She quickly moved away for college and thought better of returning to
that small town on a long term basis. City living is definitely the life for
her…
GM’s day job, working with people on the Autism spectrum,
keeps her on the go most of the time. That is when her three small daughters
and husband are not pulling her in different directions. GM is the kind of gal
who is quirky, unique, smutty, crazy, hard to hate, harder to love. She has
taken her love for telling stories to the next level by putting her hat in the
romance writing game
If you are interested in romance with twists and some darker
themes Author GM Scherbert will be right up your alley.
Oh, and she loves herself a good stalker – if you think you
are up to the task!
Facebook page  Friend me on Facebook  Amazon  Street team 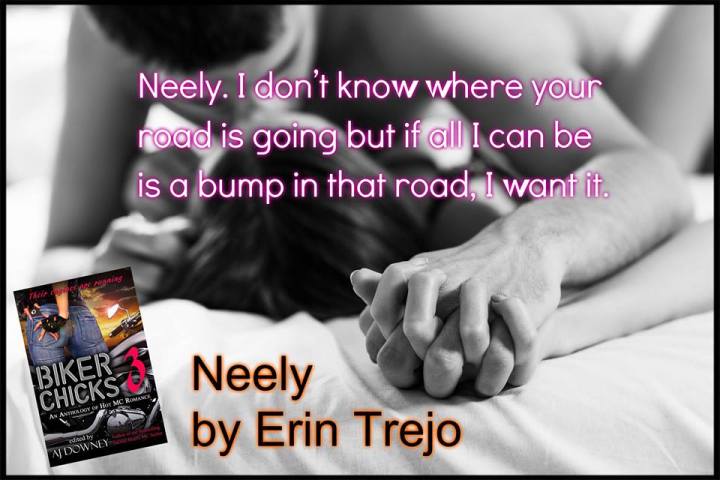 Neely by Erin Trejo
Neely’s past has kept her traveling on the same road for
years, will she change routes for Braddon?
About Erin Trejo
Erin Trejo is a stay at home mother of 4. Her general
interests are, of course, writing and reading. She loves to be able to put down
all her ideas into story form for others to enjoy. She also loves spending time
with her kids and family. She’s a pretty down to earth person and usually a
goof ball.
Newsletter  Website  Blog  Second Blog  Twitter  Amazon
Facebook friend page  Facebook Author Page  Goodreads