A private investigation business, pulling together men from the CIA, FBI, ATF,
DEA, Border Patrol, SEALS, and police, devoted to the missions no one else
wants or can solve.

A man who searches for facts:

A former SEAL, Bart Taggart’s career with Saints Protection &
Investigations fills his need to take on any mission, see it to the end, and
then enjoy his down time with his friends and easy women. A man who searches
for facts has no room in his life for deceivers.

His world is turned upside down, when assigned to assist the FBI in searching
for a kidnapped boy, he is paired with a dark-haired beauty, unlike any woman
he has met.

A woman who with the gift of sight:

Faith Romani, a psychologist and artist, works for the local police
occasionally, using her special gift of sight. Tired of hiding her gift if it
can be used for good, she strives for acceptance in a world of doubters.

Sparks fly when the two are forced to spend a week close together as they race toward
the deadline given by the kidnappers. Will Bart be able to put aside his
prejudice to accept that not all truths can be explained? Will Faith be able to
understand her visions in time to save the child? Will the two of them be able
to forge a partnership…or possibly more?

Seeing Love is a riveting novel that will hold you to the dynamic end! 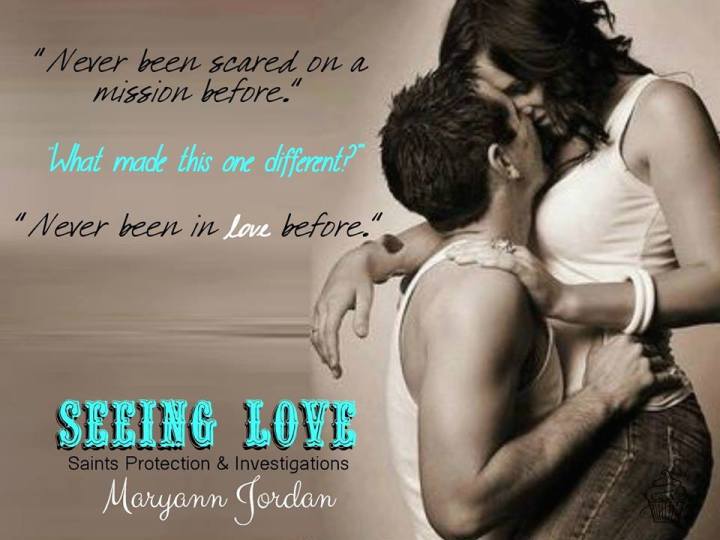 A private investigation business, pulling together men from the CIA, FBI, ATF, DEA, Border Patrol, SEALs, and police, devoted to the missions that no one else wanted or could solve. 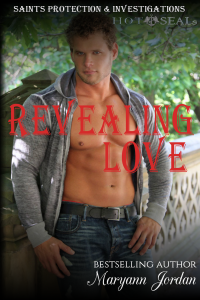 Jude Stedson was a SEAL… at least until an injury while on a mission left him with an honorable medical discharge and no direction as to what to do next.  He even relegated his girlfriend to friend status until he could decide what he wanted to do with a life that had been dedicated to the SEALS.

Sabrina Taggart loved the man…not the title.  But until she could prove that their love would continue, she took the role of friend…just to stay close.

When a con artist set his sights on her family, Jude stepped in, willing to work with her cousin, a member of the Saints P&I.  Keeping Sabrina safe gave him a new mission.  Finding a new mission gave him purpose.  When her life was threatened, Jude knew that nothing would stop him from saving her…or loving her.

Can he prove that he has what it takes to be a Saint? 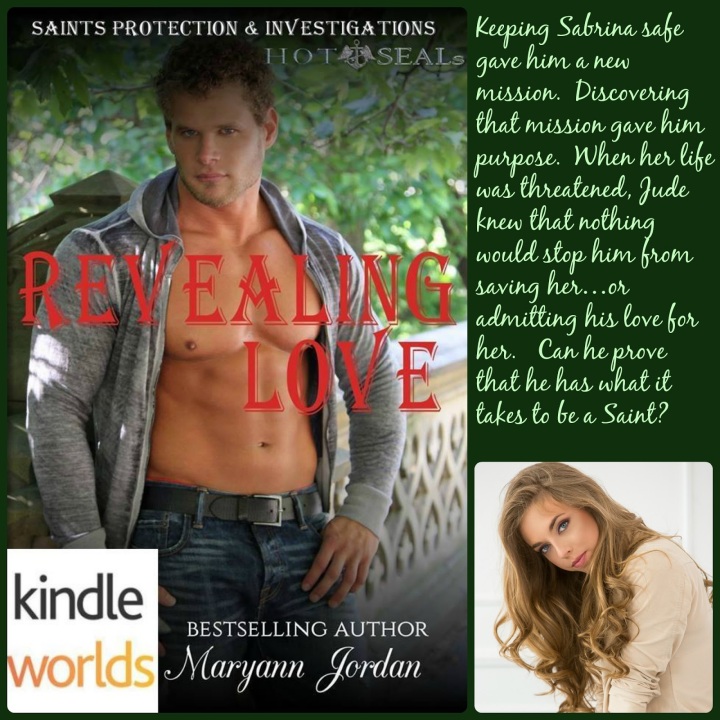 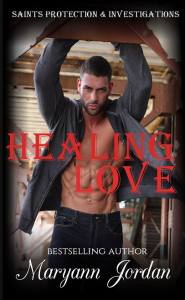 A private investigation business, pulling together men from the CIA, FBI, ATF, DEA, Border Patrol, SEALs, and police, devoted to the missions that no one else wanted or could solve.

Cam Perez left his juvenile deliquent years behind to become an undercover detective and then accepted a job with Saints Protection & Investigations.  When a friend’s sister, a Red Cross nurse, was kidnapped, Cam eagerly stepped up to take on the rescue mission.  The right man for the job, he was focused on what needed to be done…until he lay eyes on her.  And then not only saving her life but winning her heart became the new mission.

Miriam Delaro had become discontent in her hospital job, so the chance to go to Mexico to work for the Red Cross when an earthquake struck was the perfect career change.  Then she and three other nurses were kidnapped by a drug cartel, who needed their services to aid the cartel’s wounded.  She tended the ill by day, but at night prayed for a deliverer, wondering if escape was possible.  Then he came…disguised as a lowly, wounded worker.

Their meeting was only the beginning.  Having to escape the guards, travel by canoe in a storm, and cross miles of perilous Mexican cartel country to get to the ocean where the Saints could picked them up was their goal.  Falling in love was their reward. 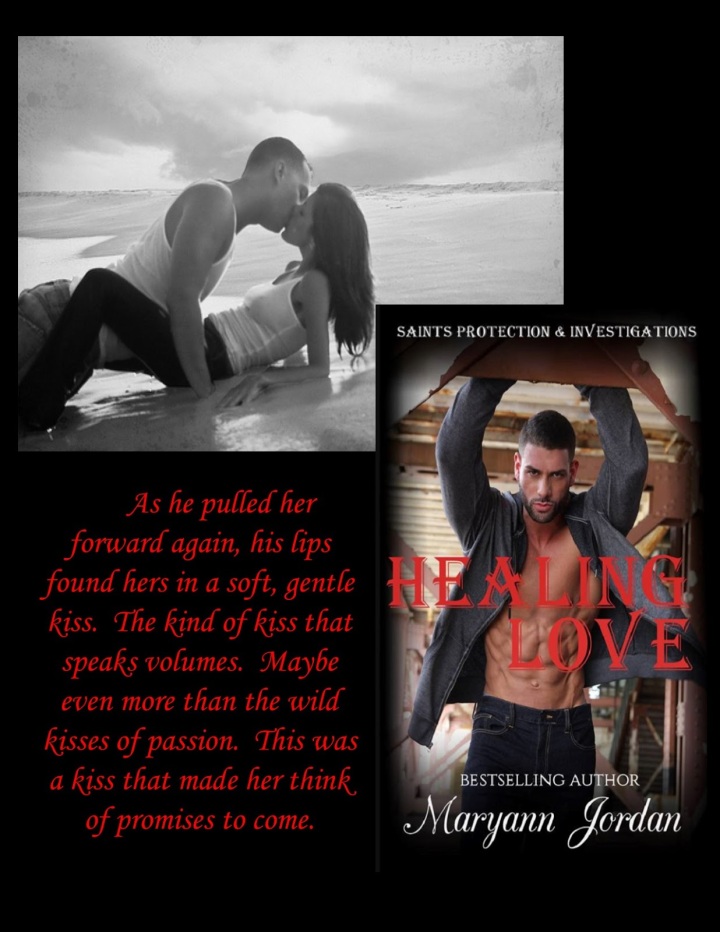 Jack Bryant left the Special Forces to begin his private
investigation business. Pulling together like-minded men from the CIA, FBI,
ATF, DEA, Border Patrol, SEALs, and police, they were devoted to the missions
that no one else wanted or could solve.

When the Campus Killer strikes again, Jack’s team is tasked by
the Governor to
find the killer, using whatever means they can.
While following the trail of the serial killer, he becomes entangled in the
life of the beautiful woman living next to his property.

Bethany Bridwell moved in with her grandmother to take over running Mountville
Cabin Rentals. She had no time for the handsome, mysterious man living next
door who continued to intrude into her life…and her thoughts.

Jack battled his growing feelings for Bethany, worried his life would not allow
for the white-picket-fence world she should have. But he was unable to stay
away.

When the trail of the Campus Killer strikes close to home, can Jack protect
Bethany long enough to give her the future she deserves? 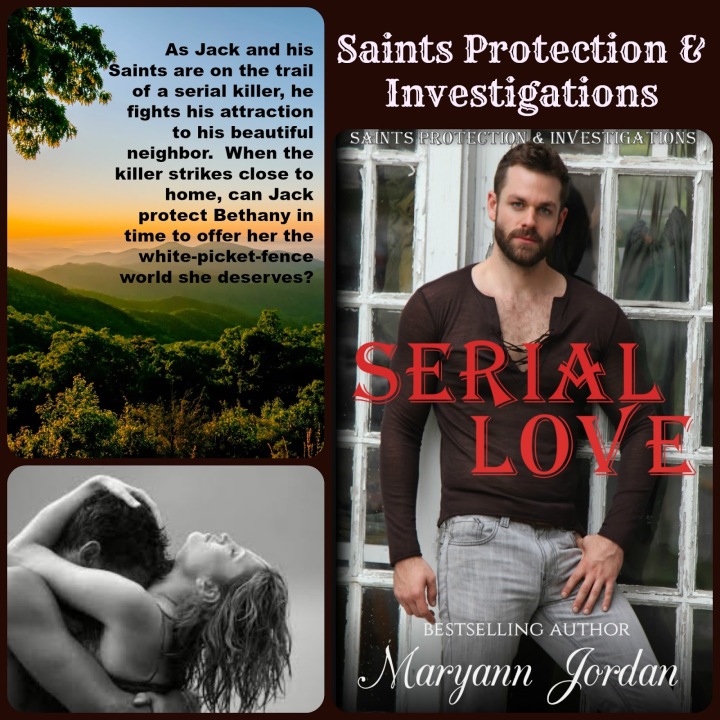 As an Amazon Best Selling Author, I have always been an avid reader. I joke that I “cut my romance teeth” on the historical romance books. In 2013 I started a blog to showcase wonderful writers. In 2014, I finally gave in to the characters in my head pleading for their story to be told. Thus, Emma’s Home was created.

My first novel, Emma’s Home became an Amazon Best Seller in 3 categories within the first month of publishing. Its success was followed by the rest of the Fairfield Series and then led into the Love’s Series.  From there I have continued with the romantic suspense Alvarez Security Series and now the Saints Protection & Investigation Series, all bestsellers.

My books are filled with sweet romance and hot sex; mystery, suspense, real life characters and situations. My heroes are alphas, take charge men who love the strong, independent women they fall in love with.

I worked as a counselor in a high school and have been involved in education for the past 30 years.  I recently retired and now can spend more time devoted to my writing.

I have been married to a wonderfully patient man for 34 years and have 2 adult, very supportive daughters.

When writing, my dog or one of my cats will usually be found in my lap!

I love to hear from readers, so please email me!