New
Caelum is virus-free, and its citizens are eager to venture outside for
the first time in nearly seven years. But when an outsider shows up
with a near-fatal dog bite along with a harsh message from Governor
Jackson, it becomes clear: the elite people of New Caelum are not
welcome outside the gates of New Caelum and new dangers lurk in the
outside world. With Cricket suffering nightmares over past battles and
West discovering a dark secret his mother kept well hidden from him—a
secret that threatens to tear Cricket and West apart forever, Cricket
and West leave the city in search of a place for the people of New
Caelum to settle. They will not only have to fight Governor Jackson’s
obstacles, they’ll be searching for a future together neither of them is
confident exists.
Purchace Links
iBOOKS ◊ AMAZON ◊ KOBO
DOWNLOAD FIRST FIVE CHAPTERS FOR FREE
Mark Renaissance To BE READ on GOODREADS 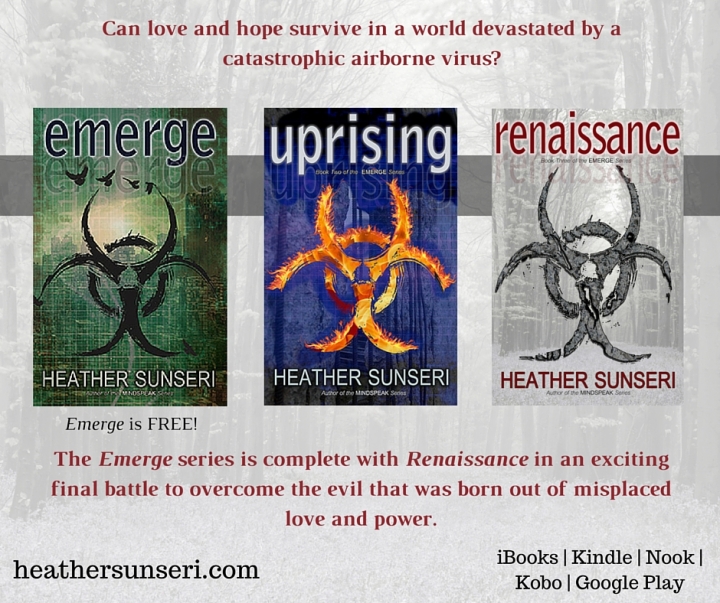 Six
years ago, a highly contagious virus wiped out more than ninety-nine
percent of the country’s population. The only person to contract the
virus and survive, Cricket fled her identity and the safety of New
Caelum, an airtight city. Now eighteen, she watches the city where the
wealthy cocooned from the devastating outbreak. When the city’s rumbling
incinerator wakes her one night while she and her friends are camping
just beyond the city walls, she alone knows what the fiery machine
means: the lethal virus is back.
Only
eighteen, Westlin Layne is already being groomed to succeed his mother
as New Caelum’s next president. Suddenly West’s sister develops symptoms
of the deadly virus thought to be eradicated years ago. Placed under
quarantine, the president confesses to West a long-held secret:
Christina Black, West’s childhood friend and first love, survived the
virus, and her body alone holds the precious antibodies to save his
sister.
Now West must leave the city to find Christina. But Cricket has no intention of being found.
Purchase Links
iBOOKS ◊ AMAZON ◊ KOBO ◊ NOOK ◊ GOOGLE PLAY
About The Author
Heather Sunseri
Heather
Sunseri was raised on a tiny farm in the smallest of towns in
thoroughbred horse country near Lexington, Kentucky. After high school,
she attended Furman University in Greenville, South Carolina, and later
graduated from the University of Kentucky with a degree in accounting.
Always torn between a passion for fantasy and a mind for the rational,
it only made sense to combine her career in accounting with a
novel-writing dream.
Heather
now lives in a different small town on the other side of Lexington with
her two children, and her husband, Mike, the biggest Oregon Duck fan in
the universe. When she’s not writing, she spends her time tormenting
her daughter’s cat, Olivia, and loving on her son’s Golden Retriever,
Jenny.
Author of the MINDSPEAK series and the Emerge series
http://heathersunseri.com
Sign up for my newsletter: “A Piece of My Mind”
https://www.facebook.com/heather.sunseri?fref=ts