Where to begin on telling you how much I love this book! The action and Charters seem to just explode off the pages at you. Ryker is all alpha male; you can’t get enough of him. Faith is going to just break your heart! So much hurt that you want to fix everything for her and slap her all at the same time!  The spark that is between Ryker and Faith is just unbelievable.  I love every minute of this book and could not put it down until I turn the last page, then I still didn’t want the story to end. Stacey did an awesome job bring the charters and story to life.  You feel like you are right there seeing the pain, heartache, and betrayal.

I am looking forward to read more from Stacey Lynn.

No one knew the devastation of those three words more than Faith Winston and five years ago, she endured every one of them. All she wanted was to feel safe and marry the very man who promised to love her and protect her, Ryker Knight.

But growing up in the Nordic Lords Motorcycle Club, she should have known she couldn’t have a happy ending. Instead, her world became a nightmare. The bikers—her family—abandoned her, leaving her to crash without their safety net.

Ryker Knight has spent the last five years consumed with guilt, running from the ghosts that haunt him. That is until his past catches up with him the moment his brother needs his help. Returning home to Jasper Bay, he’s forced to face the same ghosts he was running from. Only to find that the woman he loved is trapped in a hell of her own, entrenched behind enemy lines —and it’s all his fault.

And even though Ryker’s life comes with priorities that he can’t – and won’t – turn his back on, he refuses to leave Jasper Bay until he’s found Faith.

But will she want to return to the life she’s always wanted even if Ryker is no longer capable of giving her what he once promised? 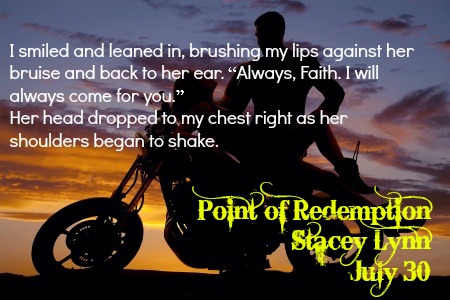 Amazon Bestselling Author of the Just One Song series, Don’t Lie to Me, Remembering Us and the Nordic Lords MC series.

I am a wife, a mom, and a writer. I can often be found curled up on the couch with a good book, or obsessively eating Skittles in a very complicated and organized manner. No joke.